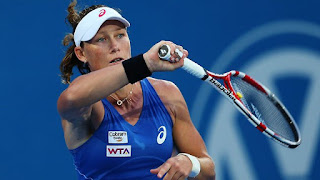 Former US Open champion Samantha Stosur of Australia says her poor form heading into year's first grand slam, Australian Open, means nothing.  Stosur most recently lost her first round matches in Brisbane and Sydney. But the former US Open winner is adamant it is not playing on her mind heading into her opening round clash against Taiwan’s world No 86 Kai-Chen Chang.

"No doubt I would have liked to have won a few more matches than I have,"  said Stosur

"It is two matches, it is the start of the year and a lot of people can be a bit rusty. As long as I am feeling good on the practice court and doing everything I can, I don't think those losses will mean anything if I can get through a few rounds and feeling good."

Stosur is yet to reach the quarter finals at the Australian Open and her best result comes from 2006 and 2010 when she reached the fourth round. Last year, Stosur lost to Sorana Cirstea in the opening round.
Posted by Sampath at 9:21 PM