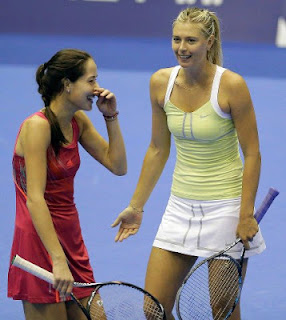 Ana and Maria Sharapova teamed up to defeat Italians Roberta Vinci and Sara Errani 2-1 in an exhibition event in Milan. Ana opened up the tie, putting the international team 1-0 ahead after beating Roberta Vinci 7-6(7-5). Sharapova then defeated Errani 6-3, before Ana and Sharapova lost the doubles rubber 6-4.
Posted by Sampath at 12:55 AM No comments:

Ivanovic teams up with Sharapova in Milan 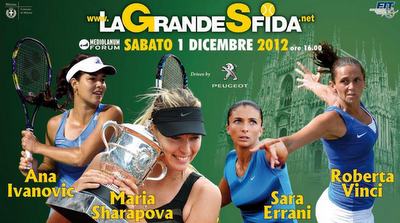 Former world number players and grand slam champions Maria Sharapova and Ana Ivanovic team up in Milan exhibition against Italians Sara Errani and Roberta Vinci. Four of the players are ranked inside the top 20. Last year's edition featured Francesca Schiavone, Flavia Pennetta, Venus and Serena Williams. Sharapova will take Errani and Ivanovic will take Vinci in their one set singles matches, subsequently the Serbian and Russian duo will take the Italians in the one set doubles match.
Posted by Sampath at 4:13 AM No comments: 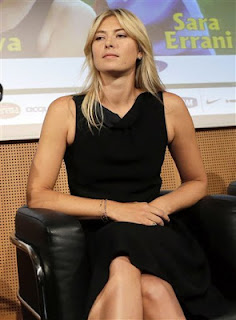 Russian tennis star Maria Sharapova aims to return to the No. 1 spot in the rankings after a solid season in 2012. Sharapova won the French Open this year to complete the career grand slam. ''Obviously, the goal is always to shoot for top spot and that's always where you want to be and stay,'' Sharapova said. ''It's one thing to reach the No. 1 ranking, another to keep it.'
Posted by Sampath at 3:58 AM No comments: