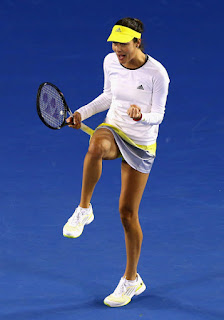 It's been a while 2008 Australian Open runner up Ana Ivanovic played a night match on Rod Laver Arena but the Serb showed no struggle and no mercy towards her Hungarian opponent Melinda Czink in her first round match prevailing with a 6-2,6-1 terrific win. Ivanovic could have repeated 2008 Australian Open semi final encounter with Daniela Hantuchova in the second round but the Slovakian lost to Taipei's Yun Jun Chan, who is now Ana's second round adversary.