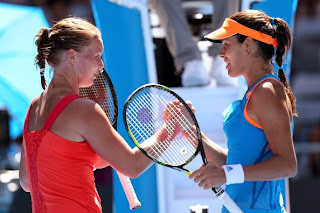 Ana Ivanovic beat Kiki Bertens of Netherlands 6-4,6-4 in the opening round of 2014 Australian open to begin her campaign at the first grand slam of the year. Recent Auckland champion struggled with her serve throughout the match but managed to close out the encounter in two sets over the error-prone Dutch. Former number one Ivanovic will take on Annika Beck of Germany in round 2 on Wednesday. Beck impressively defeated Petra Martic of Croatia in her opening round without dropping a game to score the first double bagel of the tournament. 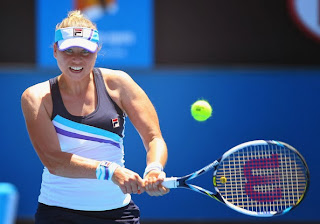 Casey Dellacqua powered her way to an impressive 6-2, 6-2 victory over the former world Number 2 Vera Zvonareva from Russia. Dellacqua dominated the match against the 2010 Wimbledon and US Open runner-up, who is coming back to the competition after a soldier surgery. Another crowd favourite Sam Stosur beat Klara Zakopalova in straight sets 6-3,6-4.