Azarenka and Stosur out with injuries 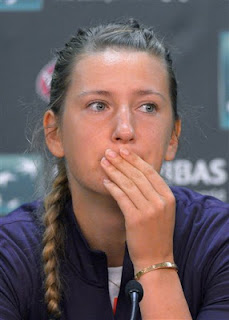 Defending champion Victoria Azarenka withdrew from the BNP Paribas Open on Thursday because of a right ankle injury that had been bothering the world's second-ranked player since before the tournament began. Azarenka was scheduled to play No. 8 seed Caroline Wozniacki in an afternoon quarterfinal that would have pitted two former top-ranked players against each other. Earlier, No. 7 seed Sam Stosur pulled out of her quarterfinal against No. 4 Angelique Kerber because of a right calf injury.
Posted by Sampath at 9:14 PM