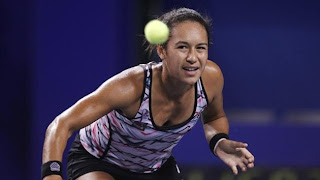 Heather Watson won the Japan Open title after a marathon 3 hour 12 minute battle with Chang Kai-chen. The match saw Watson hold match points before Chang came back and won the second. Chang went up a break and had multiple match points at 5-4 before Watson broke and won a final-set tiebreak. Watson won by a score of 7-5, 5-7, 7-6. With this win, Watson attained a top fifty ranking for the first time in her career, at the same time overtaking compatriot Laura Robson as the British number one. Heather also became the first Brit to win a WTA Singles Title in 24 years.
Posted by Sampath at 12:37 AM