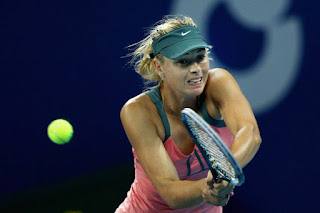 tories over Elena Vesnina and Polona Hercog. The defending champion and the third seed Agnieskzka Radwanska of Poland struggled little a bit in her third round encounter against Lourdes Dominguez-Lino of Spain but came through in three sets 2-6,6-1,6-4. Angelique Kerber outlasted two year's ago champion Caroline Wozniacki of Denmark 6-1,2-6,6-4 meanwhile Li Na beat Peng Shuai in three sets to reach the quarter finals after the all Chinese third round clash. Carla Suarez Navarro and Romina Oprandi are the surprise quarter finalists in the draw and Oprandi made into the last eight after beating the former world number one Ana Ivanovic of Serbia and Suarez Navarro upset 4th seed Petra Kvitova and former world number one Jelena Jankovic of Serbia on the way to the last eight.
Posted by Sampath at 7:32 AM