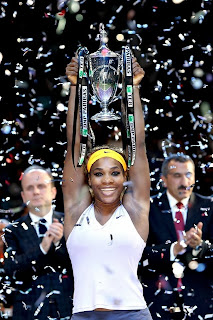 Serena Williams ended the best season of her career beating Li Na 2-6, 6-3, 6-0 to win WTA season ending championship in Istanbul. Williams clinched second consecutive WTA Championship and fourth overall and finishes the season with 11 WTA titles to her name this year. Also Williams has won 78 of 82 matches this year and is set to finish the year as the top ranked player for the third time in her career after 2002 and 2009. Williams win brought her annual winnings to whopping $12.4 million, record breaking earning.
Posted by Sampath at 9:25 PM