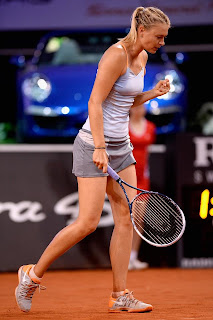 Top-seeded and the defending champion Maria Sharapova needed three sets and more than three hours Thursday in her clay-court season opener to overcome Lucie Safarova of the Czech Republic for a place in the Porsche Grand Prix quarterfinals. Sharapova finished the 3 hour marathon with a 6-4,6-7,6-3 scoreline. Sharapova will face Ana Ivanovic in the last eight stage. Jelena Jankovic and Carla Suarez Navarro caused two biggest upsets in the singles draw in round 1 but both of them dramatically fell in round 2 to Sabine Lisicki and Yaroslava Shvedova respectively. Shvedova defeated Suarez 7-5,6-4 while Lisicki beat Jankovic of 7-6,7-5