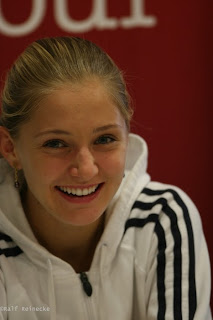 Former world number five and US open semi-finalist Anna Chakvetadze has announced her retirement aged just 26 due to chronic back injuries after a career blighted by an horrific armed robbery in 2007. Chakvetadze earned nearly £2.5 million in prize money over a career that spanned a decade and included a semi-final at Flushing Meadows in 2007, eight WTA singles titles and two Fed Cups with Russia.

"I no longer see myself in professional tennis so I am ready to say that may career is over,"


"Of course, this was a difficult decision and I thought hard about it but now it is finally taken. I understood that the point of return to tennis was behind me."

"I have a chronic back injury. So I took the decision to stop and start a new life."
Posted by Sampath at 9:37 PM