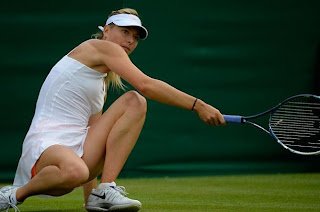 World no. 2 Maria Sharapova has withdrawn from the Rogers Cup due to a hip injury. Sharapova suffered the injury during a fall in her loss to Michelle Larcher de Biro.

Sharapova, who has been working with Jimmy Connors as her new coach since Wimbledon, commented, "I'm extremely disappointed that I'm unable to play in Toronto next week as it's one of the best and most important tournaments of the year. I was looking forward to making a healthy return to the courts in front of my Canadian fans but unfortunately I'm just not recovered yet."
Posted by Sampath at 5:32 AM